Samurai is located in the building that used to house the Shinjuku Pit-Inn before they moved to their current location. When you enter to the left off the elevator you immediately are taken into another era, face to face with a 5-foot manneke-neko (招き猫`lucky cat figurine`). These cat figurines are omnipresent at the entrance to Japanese eateries and shops, beckoning in customers with a raised paw. Inside the Samurai are more than 2500 of these lucky cat figurines spread throughout the interior, hanging from the walls, piled in cabinets, in paintings and in photos. Some frowning, some scowling, some with a serene smile..it’s an awesome site. Hanging on the walls are scrolls of haiku calligraphy, left wing underground theater posters plus some seemingly right-wing nationalist Japanese propoganda..a bewildering mix that adds to the mysterious atmosphere.

In between the cats and the scrolls there are signed album sleeves on the wall, from owner Miyazaki-san`s time in New York in the 1970’s. The music reflects Miyazaki-san’s maverick character; in one visit I heard John Zorn, James Carter, Count Basie, Abdullah Ibrahim and Big John Patton..quite a mix of styles in one sitting, and all glorious. Dark, quiet, extremely peaceful..with the cats making it just a tiny bit unsettling,the Samurai is a place that lends itself to contemplation.

Miyazaki-san is usually there early on Saturday afternoons for “cafe time” but call first. And be sure to look for the postcard on the front door, it will explain the origin of the name “Samurai”..and it’s not what you think..

Tokyo Jazz Joint photos of Samurai can be seen here.

Come out JR Shinjuku station at the East-South exit. Go down the steps and walk on the left side along the overpass on your right. About three buildings down you’ll see the hanging blue sign for the Samurai, right before a noddle shop. Go up the three steps and take the rickety elevator to the 5th floor. Miyazaki-san is usually there by 6 on weekdays and 3 on Saturdays, but call first just to make sure. 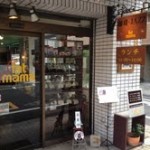 ナルシス (Narushisu)
Shinjuku   Cafes
2F, 1 Chome−13−6, Kabukicho, Shinjuku
I found this tiny gem of a jazz cafe amidst the chaos that is Kabukicho in Shinjuku. It is a smal...

Shiramuren (シラムレン)
Shinjuku   Bars
1 Chome−1−10, Kabukicho, Shinjuku
How can I describe this place? It’s small, dark and old; owner Otsuka-san was surly and u...