I landed in Yangon, Myanmar for a brief four day visit, aiming to learn about whatever music scene currently exists there. The following is a diary of what I encountered. (Note: The locals I spoke with all used the names Burma/Myanmar and Rangoon/Yangon interchangeably. I have used Myanmar & Yangon here, but with no political or historical implications.)

“Our country was closed, many years. Now we have openness, it is good. So much information..everyone has smartphone. I’m so happy. But some people are..how do you say..there is confusion..?”  — Young taxi driver in Yangon

Waking up in downtown Yangon and leaving the hotel I took a short walk to get oriented and acclimatize to the stifling, punishing 38C degree heat. First impressions of a new town always stick with you; walking just ten minutes in central Yangon I was struck by the prevalence of smart phones, everywhere. The laborers on the construction scaffolding, the old Indian man at the betel nut/tobacco stand, all the monks passing by in their maroon robes. Every head seemed in a perpetual tilt downwards, reading, texting, watching. Perfectly normal in Tokyo, perhaps not what I expected in Yangon?

I stopped in a small shop to buy water; the young guy behind the counter with bright dyed blonde hair was playing some sort of local pop music, all drum machines and sequencers.  He couldn’t speak English but smiled and nodded when I pointed at the radio.  There was music everywhere as I wandered down the gridded downtown streets; coming out of cars, shops, people’s phones and at street food stalls, almost all of it local or Asian pop.

Downtown Yangon is easy to navigate yet I found myself taking a long time to walk anywhere, always distracted by the sights and sounds, the street stalls and salespeople, the incredibly bright colors everywhere. Was it really two plus years since I had visited SE Asia..? My senses were overloading.

I had an appointment after lunch to visit the Gitameit Music Center school a bit outside central Yangon, so ordered a taxi and made the 30 minute drive out to Yankin township. Gitameit was opened in 2003 as the first non-state aligned music school in the country. It remained the only one until very recently when a few other academies opened, though from what I heard these seemingly focus more on profit rather than education. After some checking with locals on the street my taxi driver pulled up at Gitameit.

The main building is a crumbling old wooden structure with several practice rooms, and a small performance space room in the side building.

The rustic setting belies the fact that Gitameit has put on some very successful events, including sending an ‘all-star’ group of Burmese classical musicians to the ASEAN music expo in Thailand. I was eager to hear more about this institute and settled down with my contact at Gitameit, pianist/vocalist/school music librarian Ne Myo Aung.

Ne Myo spent three years in the US studying in Washington state and is fluent in English; he outlined how Gitameit started with the aim of providing proper and thorough music education to its students, something they could not receive anywhere in Mynamar. “The state university does not teach Western music, basically. And no primary schools in Burma, no high schools; there is basically zero music education in the entire country. We want to expose students to all kinds of music and give them a grounding in proper musical education, but it takes time. This includes western music theory but also our own classical music.”

Ne Myo went on to explain how there was no attention given to music at all during the 50+ years of the brutal military dictatorship, and as a result there are two generations of people in Mynamar with virtually no knowledge of anything beyond current pop music on the radio…”most people will know some traditional songs by ear from hearing them at weddings or festivals, but there is no deeper knowledge, appreciation or interest in any Burmese classical music, let alone other countries’ musical traditions…”  This seemed far worse than I had expected, and I inquired about any classical ensembles or cultural centers performing Saing Wang classical ensemble or Zat Pwe music/dance/performance, two of the main Burmese musical traditions.

Ne Myo answered with a smile, stating “Such things were not a focus for the old regime. I will introduce you to some of the most famous classical musicians; there are few but they are top class and they are trying to pass on their skills. But first let me explain  about Burmese music to you.”

Fascinating to get this short lesson, in particular the point about traditional Burmese music being ‘horizontal’ as opposed to ‘vertical’ Western music. Not being a trained musician, this was a perfect explanation for me, verbalizing what I was hearing from his piano.

Ne Myo asked if I had time to stay for the afternoon’s recital by some of the violin students, so of course I said yes.

This was a real surprise and though the students were obviously still learning to master their instruments, I was impressed by their dedication. Most of the Gitameit students do not own their own instruments and can practice only at the school. Some of the students are in fact on scholarship from other parts of the country; the practice rooms double as their bedrooms at night.

I made arrangements with Ne Myo to return to Gitameit on Sunday to meet a master of the Burmese harp and to go to a local CD shop to see what was on offer. Sadly there are no record stores anywhere in town..an entire history on vinyl missing? (More on this later.) My taxi driver picked me up and we drove back to the hotel with some familiar musical sounds:

Japanese readers will notice right away this is a Japanese audio system. All the cars and buses I rode in while in Myanmar were used Korean or Japanese vehicles..meaning the wheel was either on the left or right. My driver told me “We have to learn to drive on both sides. Tricky at first, but you get used to it soon.”

Certainly the day so far had been enlightening and surely could not go in a more unexpected direction than watching the city streets zoom by while my cabbie pumped ‘Somebody Watching Me’ by Rockwell. A quick rest & change of clothes in the hotel recharged my energy, and I made my way back out into the streets to find Yangon’s only regular live jazz night. Even with the grid pattern of the streets, I got detoured and a bit lost, VERY hot and thirsty so decided to pop into a sidestreet joint for a beer.

This place was extremely local: full of men (the only women in the place were behind the register and serving the drinks), very loud, very real. My ears were immediately caught by the noisy chat of a guy behind me; was it some sort of music chat..?

The conversation between those two guys went on like that for the whole 30 minutes I was in the place; at one point I was certain the loud guy was teaching his friend Fela Kuti’s ‘Zombie’, saying over and over again what sounded like ‘Zom-BEE-Oh’..surely I was mistaken? But then wouldn’t Fela’s anti-authoritarian message resonate more in Myanmar than almost anywhere? I had to find the Gekko bar & grill for the jazz gig so I finished my beer and left but really regret not joining them to find out exactly what music they were discussing.

I finally found Gekko at the fascinating Sofaer Building on Merchant St, the heart of old colonial Yangon. I went in and grabbed a seat at the counter and what’s that sound? Groovy, real, jazz.

“What’s the jazz scene like in Yangon? You just saw it!” – guitarist Aaron Gallegos

American guitarist Aaron Gallegos has been in Myanmar for almost three years, working as a musician and educator.  He and his group the Bamboo Trio were swinging and authentic, even doing an adventurous version of John Coltrane’s ‘Equinox’.  Bassist Panthang told me he loved the playing of Ray Brown while drummer Soe Soe said he grew up loving all kinds of rock music and jazz, though it was hard to find things on sale. Hearing these two guys speak so lovingly about the music was wonderful..further proof that jazz is a music that has reached even those living under the most repressive regimes.  Aaron and I chatted briefly between sets and made a plan to sit down on Monday for a longer talk about the music scene and life in general in Yangon.

The Gekko restaurant is an ‘Asian-fusion’ type place, mostly filled with expats as the prices are at Tokyo levels. Nice enough and a logical spot for some live jazz, but not the kind of spot I’d want to spend much time in during my visit so I finished a couple beers and made my way home through the very dark streets, stopping only once to see this about 5 minutes from my hotel. 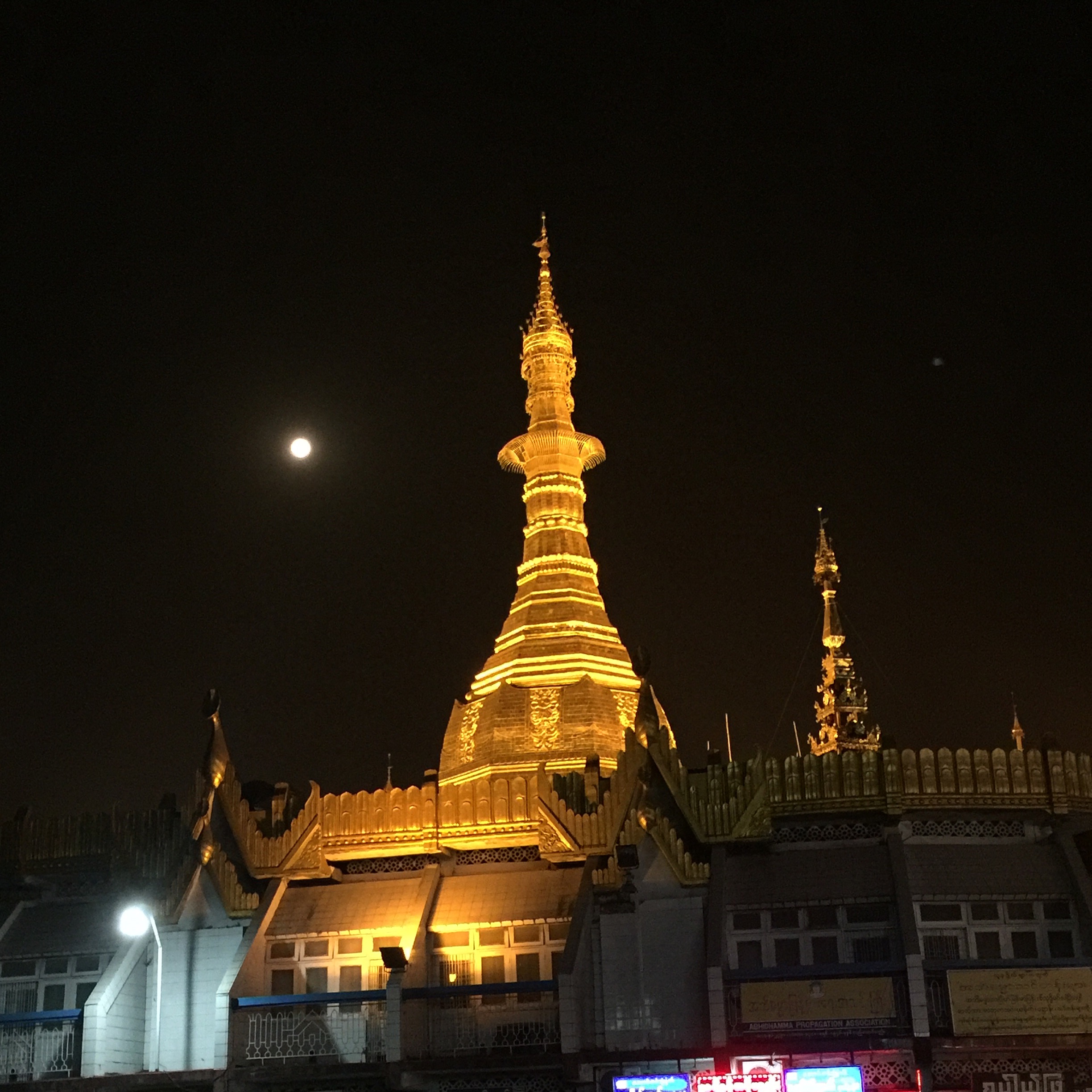 The Sule Pagoda is said to be more than 2000 years old and is the heart of the city. Flying, the intense heat and the beer admittedly made me a bit lightheaded, but turning a corner and seeing this I couldn’t help stop in my tracks and gasp..was this real?  I think I had fallen in love with Yangon in only 14 hours, and yet there was something troubling me as well. What was it, and what would I discover over the following three days?